Can a flyable aircraft be designed and built in 1 hour?

The Delta Wing Demonstrator is the result of this challenge in rapid aircraft design. Unfortunately, the answer was no. The aircraft actually required 1 hour and 20 minutes.

After demonstrating that the DWD16 was flyable, it transitioned into a low-cost demonstrator aircraft. Multiple configurations variations were flight tested. Most of the variations were taped or glued to the delta wing structure and removed after testing.

Wing rock in a delta wing configuration must absolutely be a consideration in the flight control system design. At the higher AOAs, the time to double (or cycles to double) is low enough to easily pull the pilot into PIO or uncontrollable attitudes.

The DWD16 also provided a platform for testing a new video transmission system. 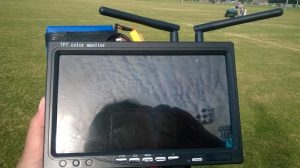 As a demonstrator vehicle, adding tufts to the delta wing was instructive. The tufts visible show the leading edge vortex and the interaction with the twin verticals. At the higher angles of attack, watching the vortex structure is particularly interesting. Notice that the audio allows you to hear the tufts hitting the surface. I found this to be one of the most interesting flights with the aircraft. It is instructive to watch the wing rock time-to-double at 6:25. At lower AOAs, the limit cycle remains visible in the video.

The DWD16 is retired. The final flight gave me a hard lesson in aircraft design and failures. I experienced an inertial loading failure of the battery mount during a sustained roll. The battery disconnected from the receiver, disabling the FCS. I knew that the BEC (battery eliminator circuit) was the most likely failure but discounted the inertial loading. The worst part is that the propeller ingested parts of the propulsion wiring. Otherwise, this would have been a $5 failure.

The final and best configuration had a 15% static margin with a single central vertical stab. The delta wing had an amazing high alpha flight envelope. The turn rate (>360 deg/s) is tremendous at the expense of tremendous energy losses from the induced (vortex) drag and the separation drag. Overall flight efficiency for a delta wing is relatively poor, but the dynamic flight performance is excellent.

As a demonstrator and given the low cost and minimal construction time, the DWD16 performed its mission successfully.